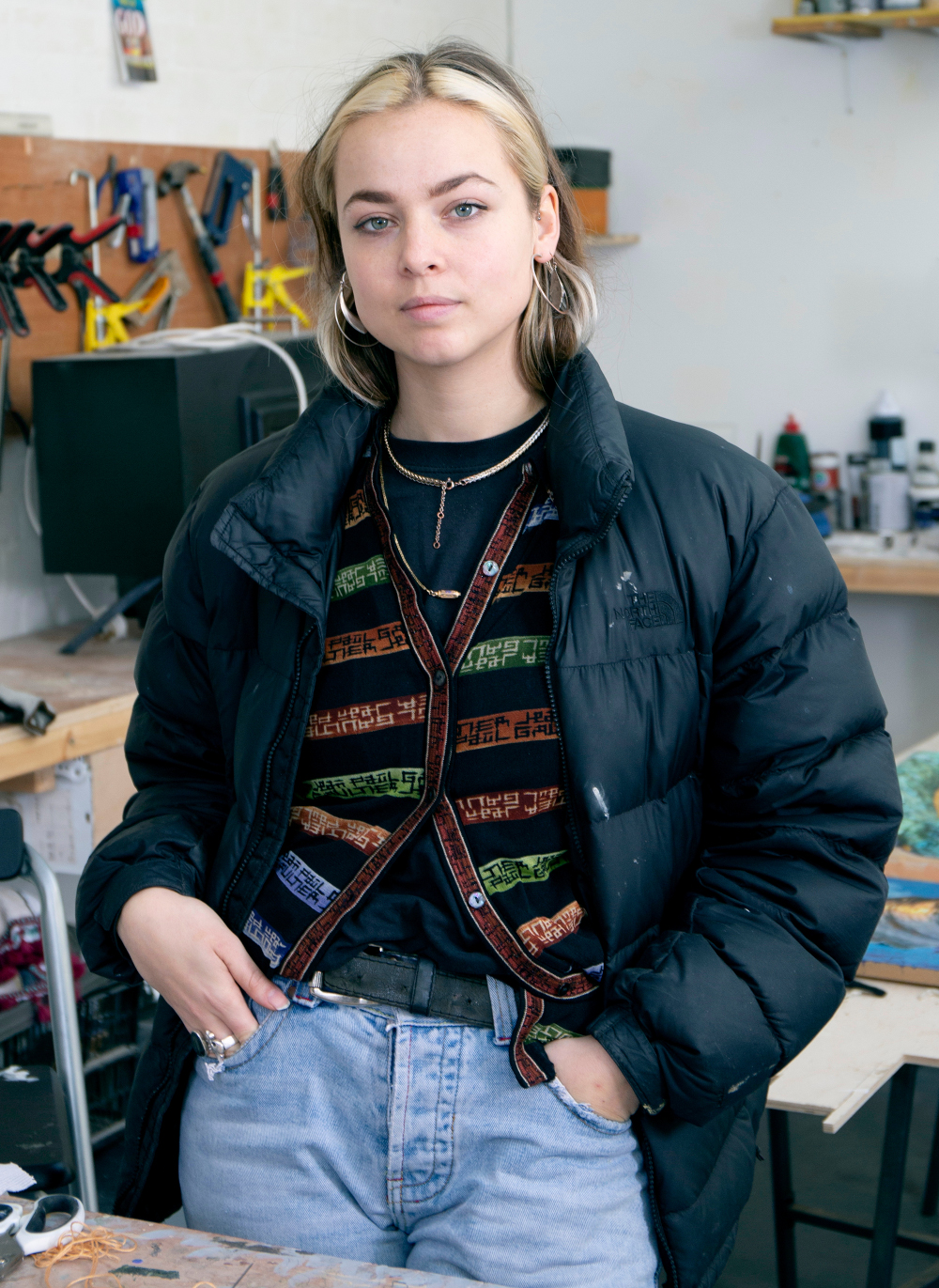 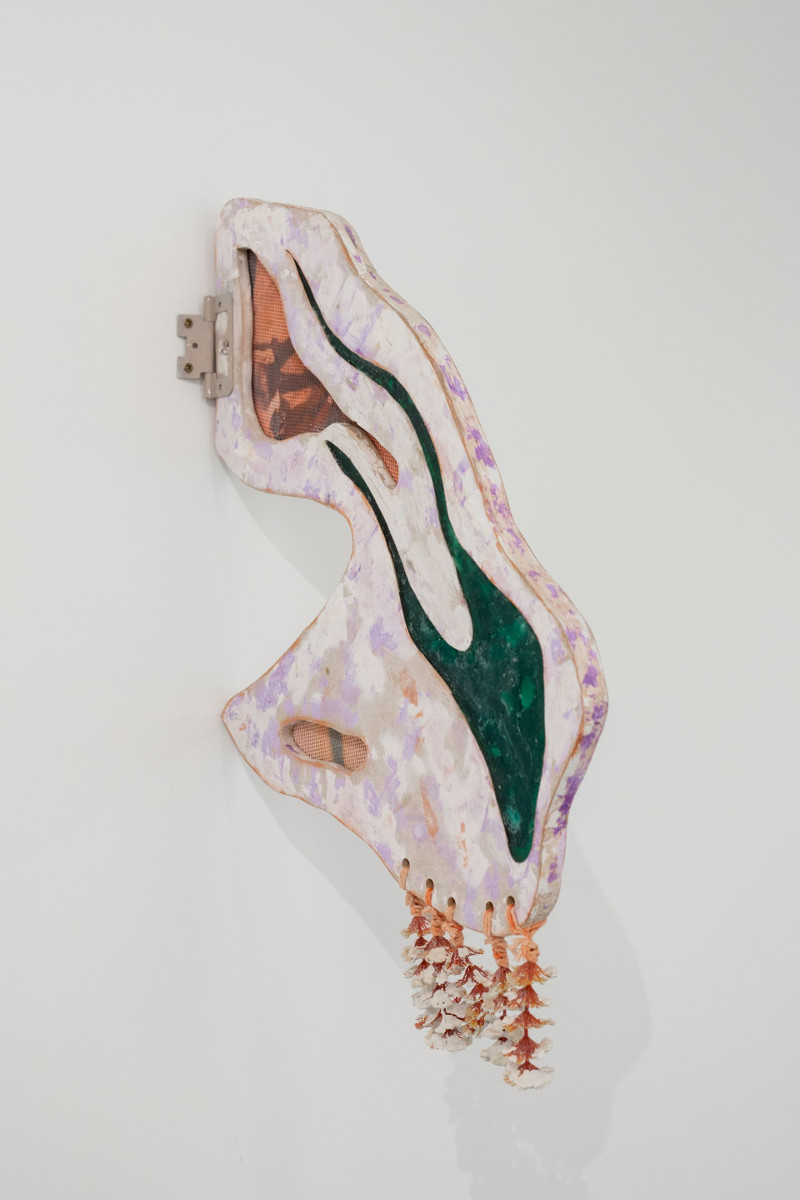 You've previously used the term 'contemporary relics' when describing your works, which I feel captures them so vividly. Can you share what that idea means to you?

I am interested in finding out what our contemporary relationship is to historical objects, how we consume them in all their forms, through shared images and files, through going to museums or collecting souvenirs. Relics take on completely different connotations depending through what lens of history they are being viewed from- so often looking at how we understand or consume historical objects can be more reflective of the time period we are in. I like this idea of time collapsing down through an object or image- how it can relate to disparate time frames or past civilizations/cultures but yet they still feel significant and relevant. I also think that cultural historical objects play a pivotal role in both a collective and personal relationship to identity and how we navigate the world around us.

Often the way relics or artefacts are presented to us a skewed our warped through the guise of history, so it helps to remember that what we are often presented is an interpretation of this. I think that’s why I am interested in the copy and paste culture of today. Although we often lose the original or ‘authentic’ object/image, what we are left with is a multitude of variations of an image/object that hold a fleeting but personal significance to the individual. The power is lost from those who control the original source. It is similar to how Hito Steyerl talks about the poor quality image in her essay, ‘In Defense of the Poor Image’. Or how Susan Stewart talks about the souvenir- a representation of all the historical significance of whatever the souvenir is a version of, but also holds a personal significance to a person’s own experience with that place/object.

On a more personal level, I am often interested in learning more about my heritage, as someone who is from the Middle East, I often like to use it as an opportunity to investigate my personal relationship to a location that I am now physical estranged from. Being estranged our having a temporal/spatial gap is pretty vital to my work. I think it can be the role of an artwork to act as a portal, or a vessel in which it transports the viewer into another space - arguably the job of the relic or artefact is to do a similar thing. However, it is often the narrative of the object that gives it significance. A museum sets up artefacts in a setting to help build a bigger story around it- through the text, through the material of the plinth it sits on or the backdrop behind it. With the works I make, I aim to confuse the narrative away and what is left is images, objects and forms that have formal qualities of historical objects but stand without this narrative - so how does the viewer then approach the artworks? 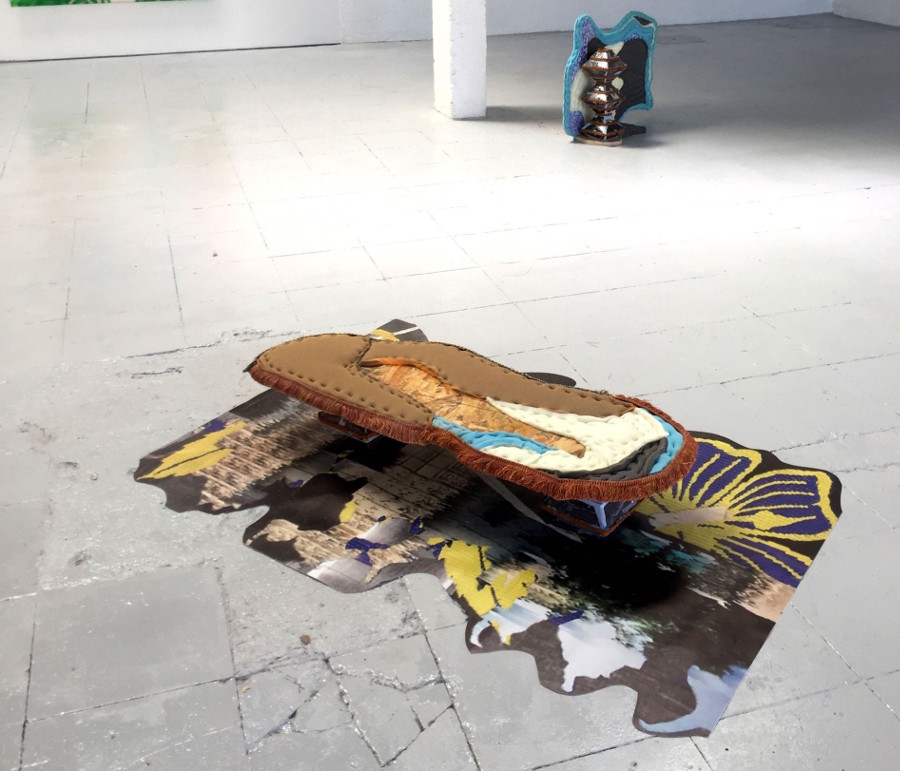 Your work can often feature many interwoven materials and textures, which seem to hint and elude to various places and times. Can you talk a bit about your material choices and their context?

Artefacts, archeological sites etc. help to make the past feel ‘real’- without these tangible objects then the tales of the past feel like a mirage, something floating in a mythical mist. And yet there is a weird irony in all of this- as often we can’t touch or experience these objects past our visual senses- scents seem to not survive time, we cannot often touch artefacts or taste them. So how do we recreate this image? Through these fragments, everchanging and developing.

That is why I want to make work that entices the viewer's senses, to use materials and textures that have a haptic quality, in order to engage with this idea of tactility. I also really want to explore the idea, that if a work is predominantly a visceral experience, can it tap into the other senses. Can it capture a sense of atmosphere or sensation of another place? In a similar way to ASMR, how a predominantly audio based experience can create a physical experience in a person.

I remember hearing Lawrence Ab Hamden talk about the association of the senses with East and West cultures. The West is historically aligned with the visual sense, the ‘rational’ sense, the discovery of perspective in the Renaissance. Whereas the East is often associated with sound and smell, the intangible senses that evoke more of an emotional connection and therefore feed into the stereotype of the East being unstable and led by emotions rather than rational. This idea really interested me, how even our senses have become political in a way. 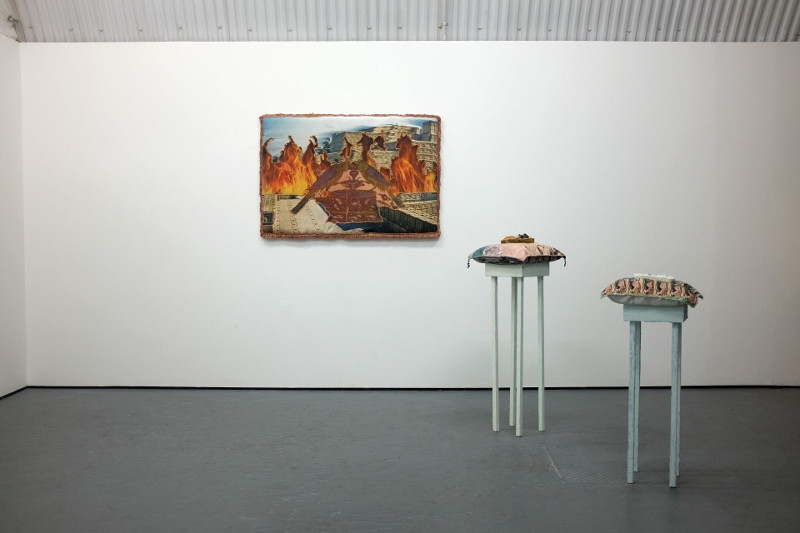 To follow up there, are there are any materials or methods that you haven't had the opportunity to try, but are experimenting with or looking to incorporate in future works?

Yes definitely, there are loads. I really want to begin included moving image into the work, I am thinking found footage clips creating short little moments that can be inserted into the works- but this is something that needs a bit of developing. I also really want to start using Jesmonite and I want to think about how I can use keep using sand to create new forms. 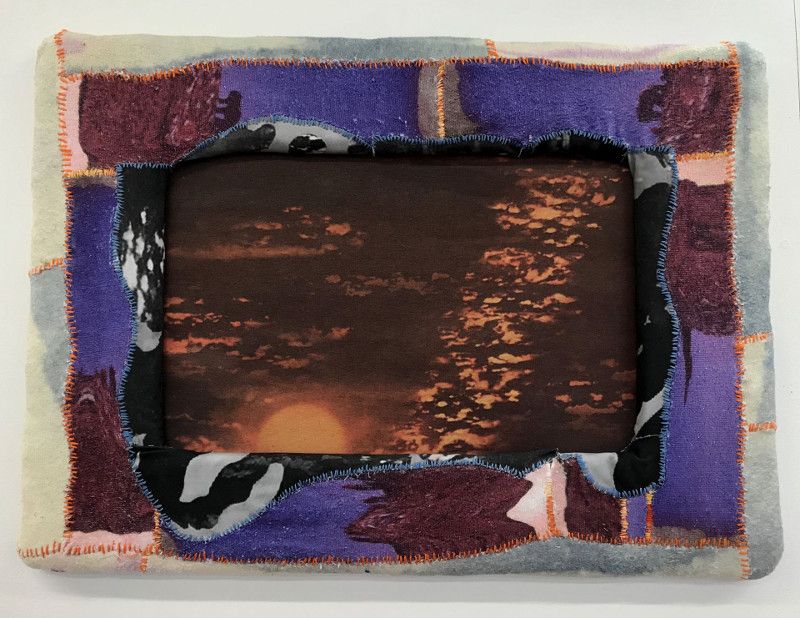 Some of your works feature digital imagery embedded into physical objects. There seems like a certain confrontation of the dissolving boundary between the physical and digital there, can you shed a bit of light on that for us?

In general, images tend to be understood as an interpretation, very much a representation of something. Whereas objects, through their material presence seem to present a more ‘authentic’ or ‘truthful’ version of whatever it aims to represent. So, what happens when these two things sit together? I hope that it creates an ambiguous nature where the work becomes both illusionary and yet very present and static.

When the internet was created, Jaron Larnier, who at the time was also working for Xerox came up with the copy and paste feature for sharing files. This was a decision made that created a culture of shared information, which meant that an image file could be copied numerous times and the original therefore becomes lost in the network. This could definitely be seen as negative as it means that people who own the original image lose credit or don’t get paid but what this does is create a culture in which the authentic file is meaningless. It holds no more significance than the 1000 copies. And each of those copies as the image quality worsens tells a tale of how a person interacts with this image and creates its own narrative. With my works, I very much want to play with the dichotomy between the idea of the ‘authentic’ and the copy, the original and the mass-produced in a post-digital society. 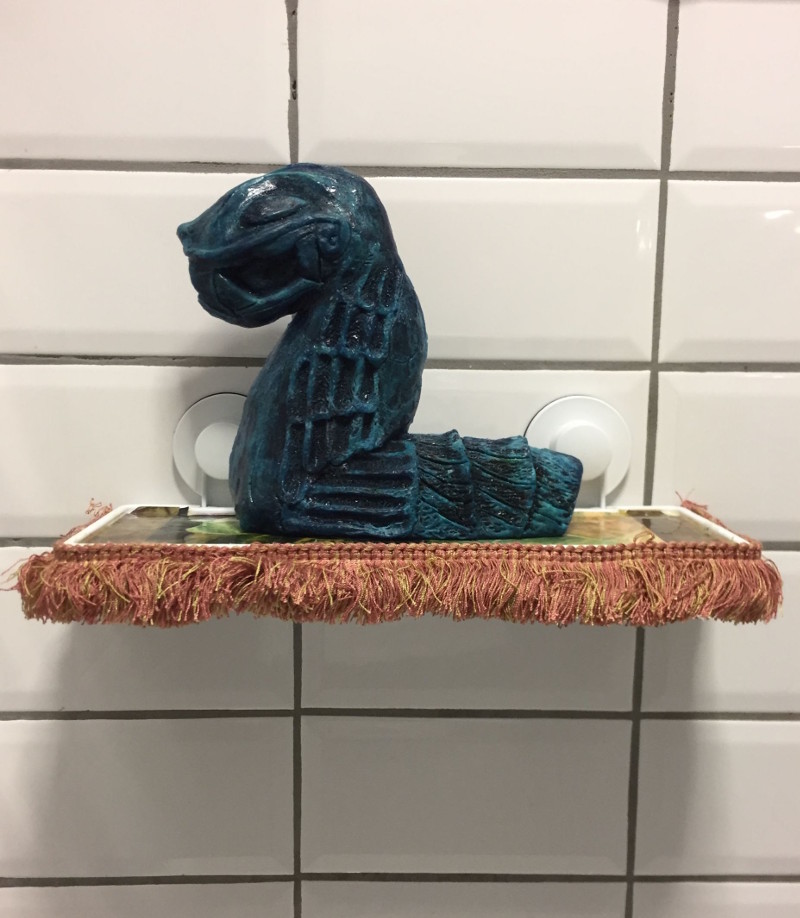 Exotic tropes such as bathhouses, tropical holidays and museums appear in your works. What draws you to these?

These spaces are little pockets in our world which different rule systems apply- they become like weird ‘real-life’ Disney land spaces. The way you would navigate these spaces is very different from how you act in the majority of the civilized world. It is as Foucault explains in his theory of Heterotopias- spaces in society that have their own rules yet are as real as well organized as other spaces. I really like this idea, of how you can physically cross a threshold or boundary as simple as the front door of a bathhouse and your behaviour is expected to change. The way tourists treat holiday locations is often extremely different from how they would treat their home. These spaces for that reason become escapists destinations, yet a very much ‘real’, controlled and planned part of our society nonetheless.

Bathhouses, in particular, I find interesting, as they were often a place during the Orientalist movement that artists and writers tried to capture in order to depict the ‘exotic’ east, for example, the paintings of Jean Leon Gerome or Ingres. So, they were used in a voyeuristic manner, to depict the East through a very certain hue of mysticism. But the bathhouse is also a space that massively appeals to the senses and I really liked exploring these two notions of the space, as sensual/mystic location and for its historical significance. 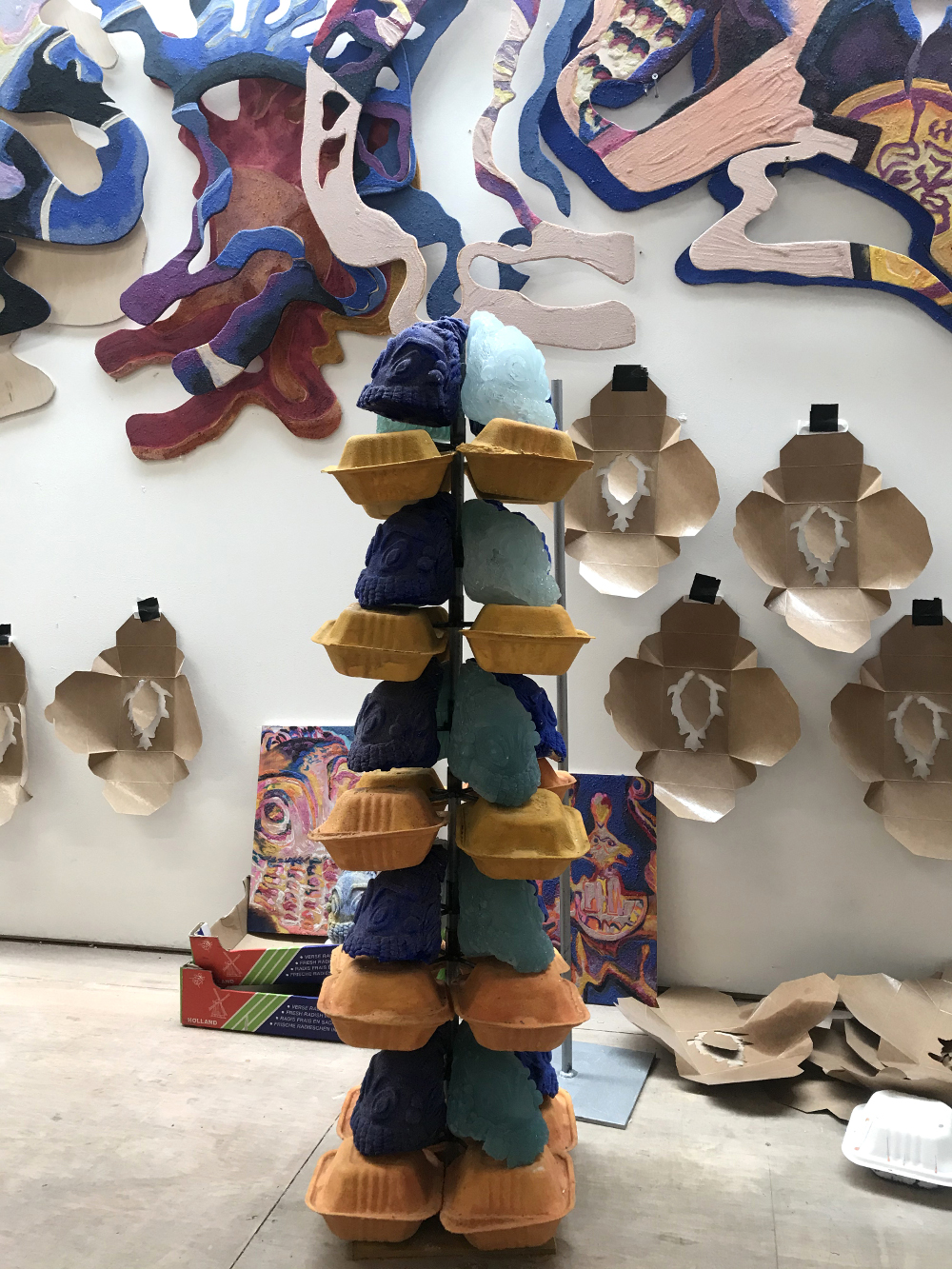 You are a member of Collective Ending, an artist-led initiative supporting emerging artists. Can you talk a little about your history and experience with the project?

I came into Collective Ending after showing some work during Absinthe, a 4-part exhibition that took place in a pub in Elephant and Castle. Through these shows, a group of us met and found that we were all on the hunt for new studios. Led by Billy Fraser and Tom Ribot, we managed to find a warehouse in Deptford which we have now converted into a new gallery and studios housing 9 artists and 3 writers/curators.

The first 6 months was pretty intense, with all of us gutting out the space, building a whole new structure from scratch, laying new concrete flooring. But now we have a space which we have total autonomy over and that’s something that is really exciting. Especially in London, when your constantly turfed out of studios, we know that we have this space for 5 years and we have been able to build it to our exact needs. The gallery part of the project is also something that has been amazing to be involved in. As someone who had little experience of curating shows prior to this, the gallery has allowed for the collective to share our skillsets and create a space in which we can facilitate hopefully really interesting shows to the wider London arts community.

It sounds like such a really promising initiative. It's good to hear about artists experiences building and curating their own studio and gallery spaces. I appreciate we live in uncertain times, but as we part ways it would be great to hear about your plans and ambitions for the future, both with Collective Ending and with your own practice. Can you tell us a bit about what you think the future may have in store?

Of course, well we have just managed to open our first exhibition! It was meant to have opened on the first week of Lockdown, so it is great to finally see it open. It is an exhibition entitled 'A Land of Incomparable Beauty' that was co-organised by myself, Charlie Mills and Byzantia Harlow (other CE members). It is a group show that includes the likes of Frances Drayson, Luisa Me, Jesse Pollock, Hannah Lees and others. It is running until the end of August, so please do come check it out. For the rest of the year, we are going to try and do a show of all of those who have studios at Collective Ending, and hopefully a massive, fun group show at the end of the year.