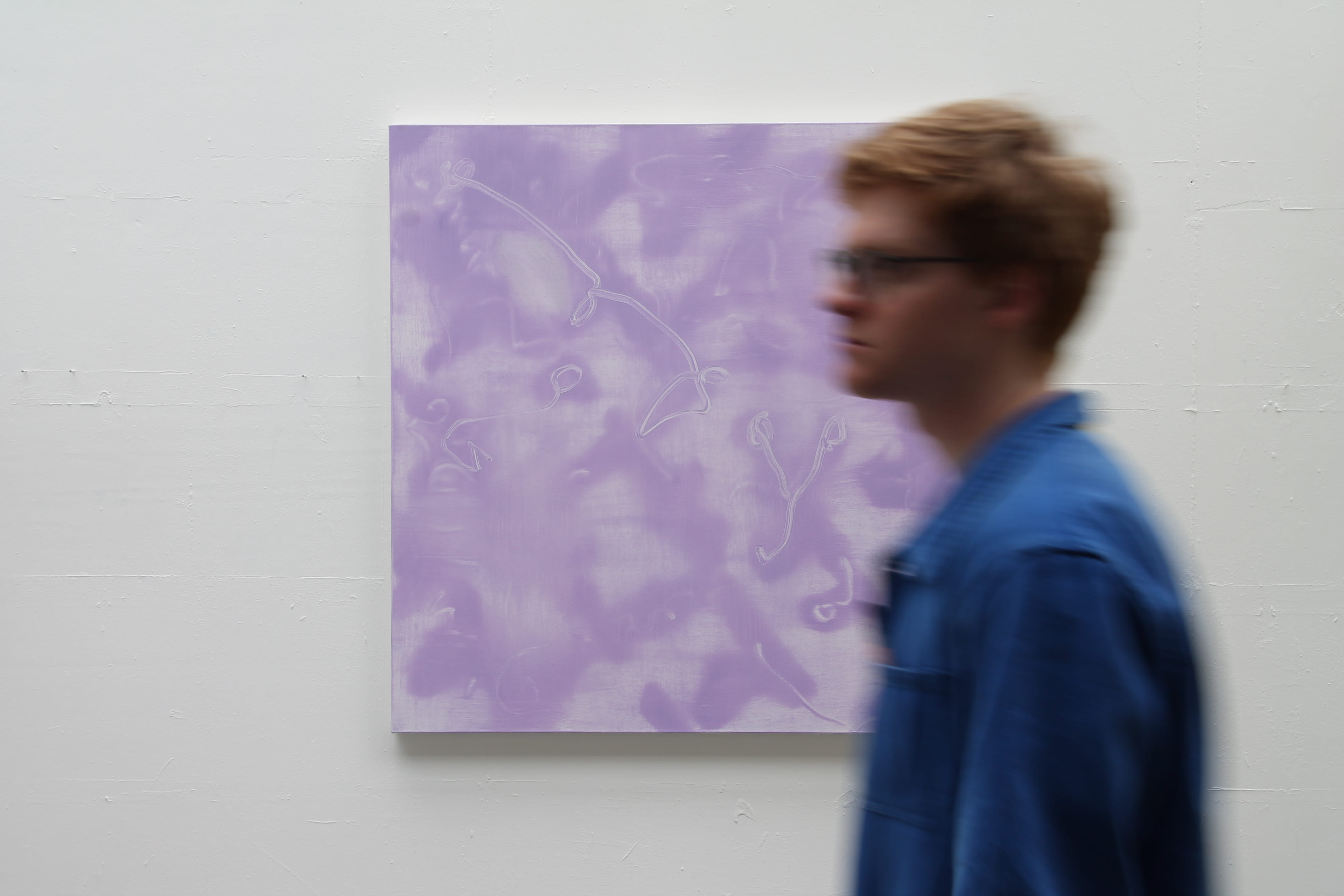 When looking at your work there seems to be an interplay between materiality and language. Can you talk a bit about this in relation to the path you've gone down with your practice?

Language and materiality are definitely key factors of my practice. The materiality came out of wanting to explore ‘objecthood’ in painting; that’s to say driving away from image and into painting as object. At art school I made a lot of work that played between sculpture and painting; I wanted to make painting but I didn’t have much interest in dealing with image. I’m more drawn to work that deals with surface and physicality and process than with illusion.

Thinking through what my practice was and what I wanted to pursue, I realised what was important or interesting for me in the work in terms of ‘content’ was it having some materiality that I was drawn to, and also having a bit of a sense of humour. That came down to it being a bit irreverent and particularly down to the language that it was dealing with to describe itself (if that makes sense). All these simple and sort of dumb gestures were a way of personifying this simple language - bad jokes, a shit one-liner or some throw-away statement. So you’re making a painting but you’re making a joke about painting. It’s a kind of contradiction I guess; really loving painting and also a sense of how stupid it might be to be making abstract paintings now. It might be a bit of a tired trope but I guess that’s how I’ve ended up making the work I’m making now.

Over time I think the humour in the work has become less prevalent or maybe a bit more tongue-in-cheek. The paintings are maybe a bit more sophisticated now in their construction and more about details in the surface and layering gestures as a kind of conversation. Those conversations often go over different pieces that lead to paintings being grouped or butted together.

Coming back to your question though, I guess my work is all about that interplay between object and language and crossing the two.


To me that answer brings out a looming self-awareness in your practice. Can you delve deeper into what you described as a contradiction in your work?

I don’t want to overplay the point but it is certainly something I’ve dealt with in my work for quite a while. I actually think about it less now but it’s certainly contributed to developing the work to wherever it sits now. I think in an institution like Goldsmiths, where I studied, you have to hold your corner a bit as a painter. You’re always going to be asked why you’re making paintings when you could be dealing with a more prescient medium or subject matter. I’ve always been drawn to painting; I like the physical matter of the paint and the canvas and the scope you have to work with.

The idea of painting being dead or something is totally boring to me but I do think it’s relevant to question why you would want to paint now. 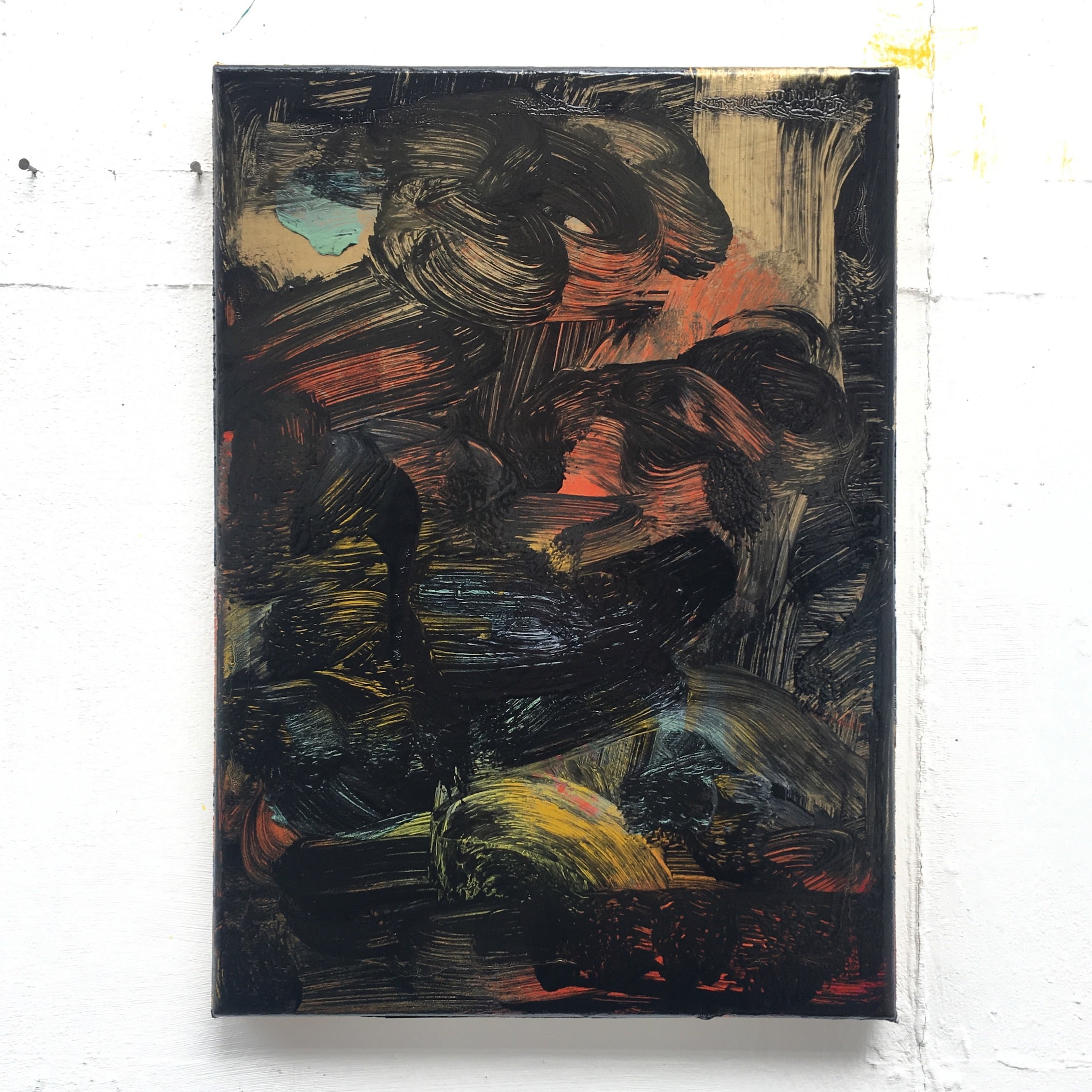 You used the word sophistication in relation to the direction of your painting. Is there perhaps a feeling that the conversations and humour are more 'serious' now per se?

Well, I wouldn’t say that the humour is in any way more sophisticated. I’m thinking more about the painting itself getting more ‘sophisticated’ in how it’s made, but maybe that isn’t the right word. It definitely sounds a bit self-congratulatory to say that! There was a point where I wanted the paintings to be deliberately a bit shit, but I found that that got a bit boring and I wanted to be more careful in the production the surfaces and effects that I was working with, using more layers and glazes and being a lot more deliberate about the mediums and colours I’m using that gave the paintings a more polished look. Funnily enough, it’s started going back the other way to an extent over the last year but who knows where that will end up. 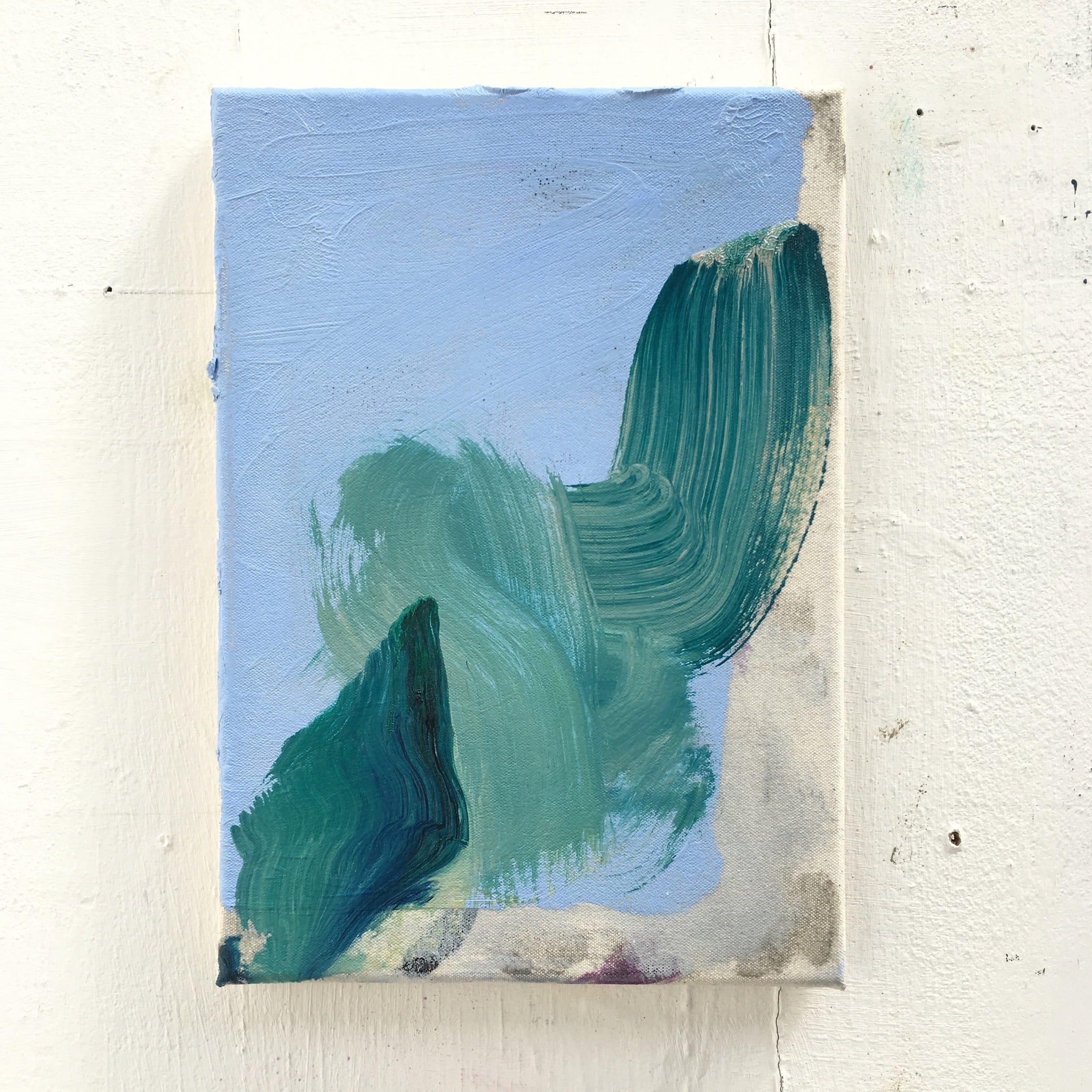 You've eluded to changes in your practice over time. Do you have a sense of the direction your work might take in the future or is it something that develops organically?

To be honest I don’t think too much about where the work is going in any arching narrative way. I notice the changes from piece to piece and take what I like at that moment and that might feed into the next painting and so on. It’s hard to see too far beyond the paintings that are currently underway in the studio; it’s more organic than designed.

I change my mind all the time on how I want the next thing to look, it might be a bit rougher like some of the more recent work or I might decide that I want to make something more polished or crisp. It’s really hard to say. 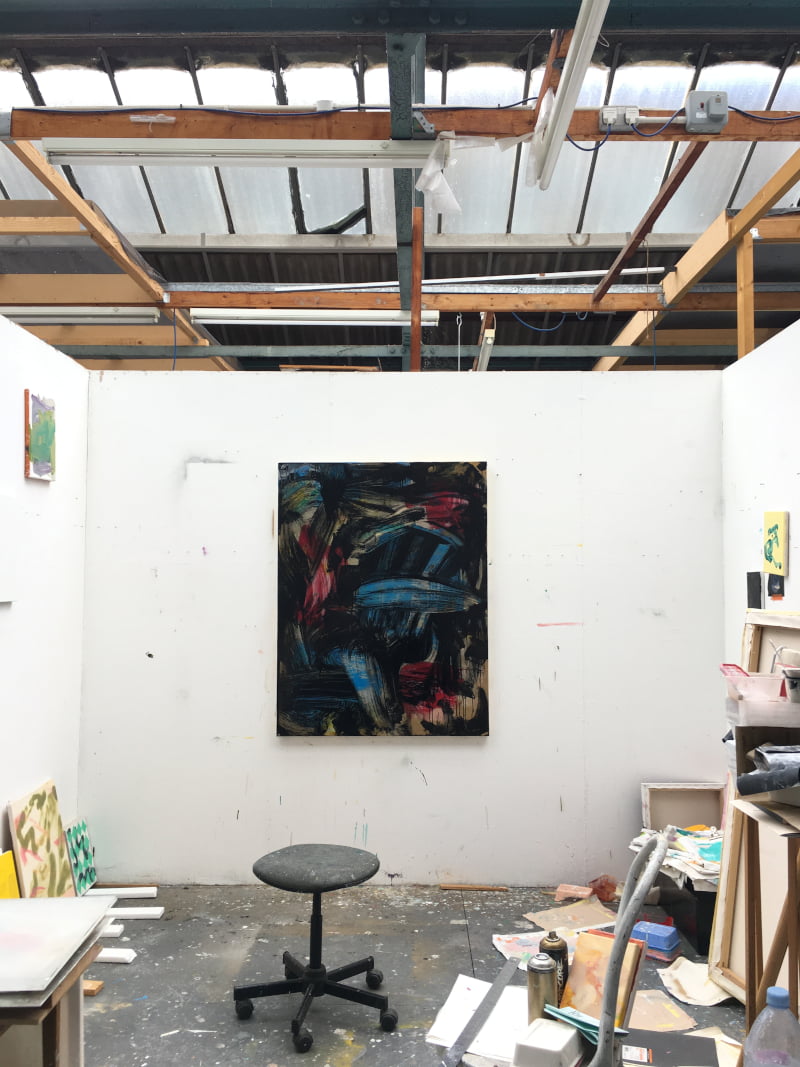 It feels that there is a process of coming to and from a piece over an extended period of time. We can often find pictures of your works in progress on your social media. What sort of time scale do most of your works come together in?

I’ve become more and more interested in the duration of work and allowing paintings time to develop in the studio. Generally, my paintings can take from a few months to possibly a year (sometimes more) to get to a point where I think they’re finished. I work predominantly in oils which means things do generally take quite a long time anyway. I like giving them time to gestate in the studio. I remember going to a talk by Katy Moran some time ago and she spoke about how the paintings would sit on her studio floor for weeks picking up dirt and splashes. I didn’t like them at the time but it really made sense to me once I was working consistently in my own space.

Ultimately I want the paintings to be as simple as possible, to achieve a kind of poise with the least amount of interference, but over time I’ll add another layer to disrupt or obscure the last one until they seem to work. I want them to surprise me a bit and maybe do something unexpected. I often find I have to do something drastic to destroy or ruin what’s happening to make something more interesting to me. Sometimes I can be really happy with them when they’re at the most simple, just one gesture but they can feel too pretty or trite.

I’m very particular about the surfaces I work on and with canvas, it takes a long time to prepare each surface - from sizing through multiple layers of oil primer to wet sanding and then leaving them to fully dry. I do also work on copper and aluminium panels as well which aren’t so intensive in their prep. In some more recent paintings, I’ve been working with unprimed sized canvases which are a lot less ‘manicured’ and allow paint to settle into the surface rather than on the surface where it can slip around more. 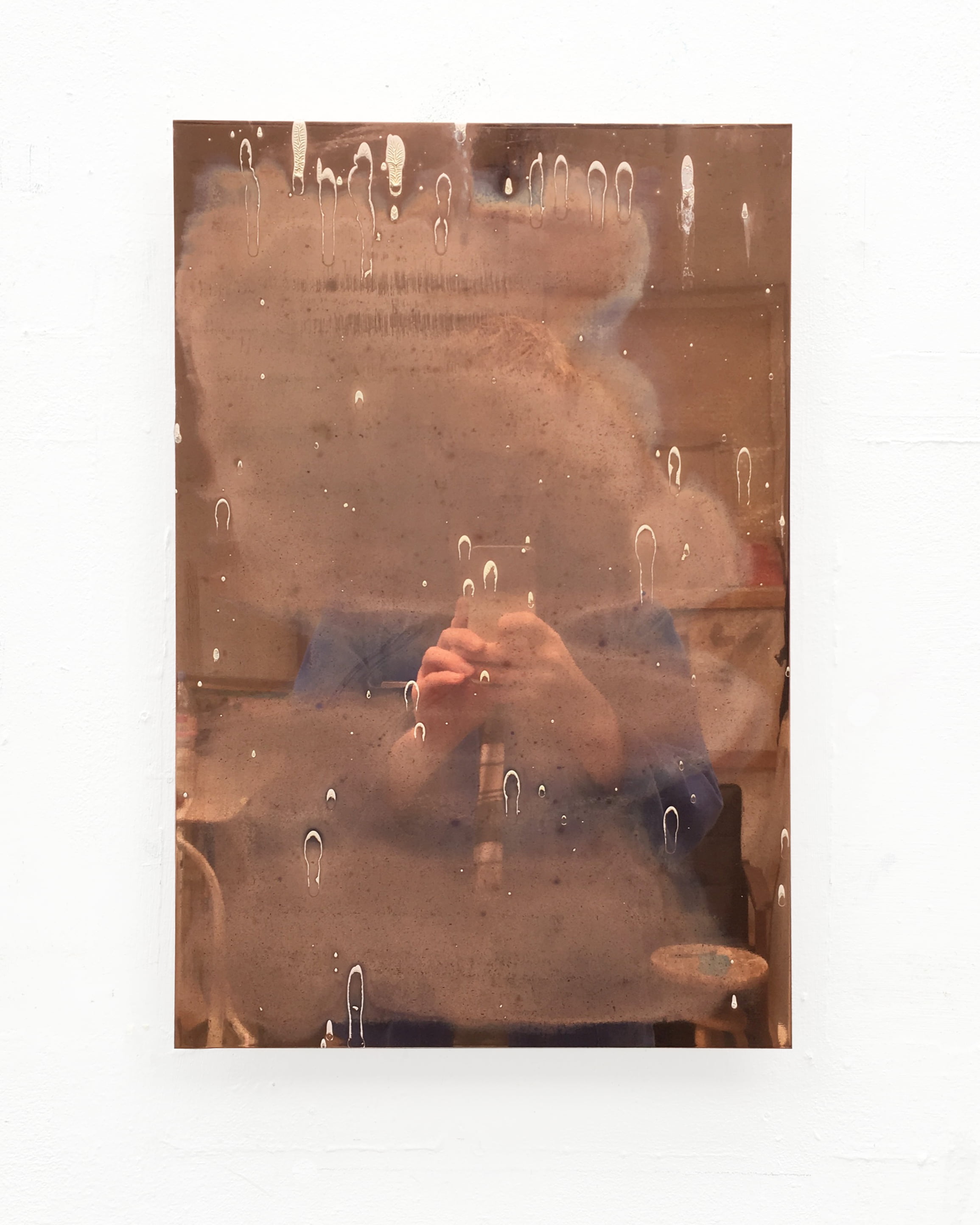 Also, I work predominantly in layers which means each layer has to dry between working which can take quite a long time, although I have found myself working wet-on-wet more in recent work to try and push ‘juicy’/gunky bits where the paint blends or bleeds. Sometimes they can get a bit bogged down or busy so I might sand them back or paint over them.

I’m working on a lot simultaneously so things have time to dry or just sit for a while. I try to make sure that I have plenty of stuff to work on so nothing feels too precious and as a result of that there can be a lot of work bouncing off each other in the studio at any one time and I’ll move things around a lot and test them next to other work to find unlikely combinations that might spark something else.

I use my Instagram account as a studio diary mostly so I do post a lot of work in progress. I find it interesting to see certain pieces developing over time on there or see combinations of works that might not last very long. It can be interesting to see the work people pick up on, it’s often the stuff that I think it’s the most throw away that people respond to but I do find I have to be conscious not to let that drive the work at all.


I've heard it said before by other artists that a certain tension can be caused when the works you spend less time on or perhaps aren't as connected to elicit the strong responses. You say you try to not let it drive the work, but does it change your relationship with those pieces in question at all?

That’s a good question. I do think this is true for a lot of artists. I find it myself visiting other people’s studios and will pick up on something that they thought was maybe just stupid or playing around with. I always want my work to do most with the least work (not in a lazy way) so if I get a lot of response from a piece that I hadn’t thought that much about I’ll tend to think through why that might be and maybe talk to other people about why it works or doesn’t. I so often find that it’s the throw-away gestures that achieve the best results in my work, so a lot of the stuff that I come to like comes from trying to ruin something that had become too fussy in the first place. So I guess that’s how that tension gets fed into the work if that makes sense? I don’t want it to drive the work but you can use it to question what is and isn’t working in your practice. 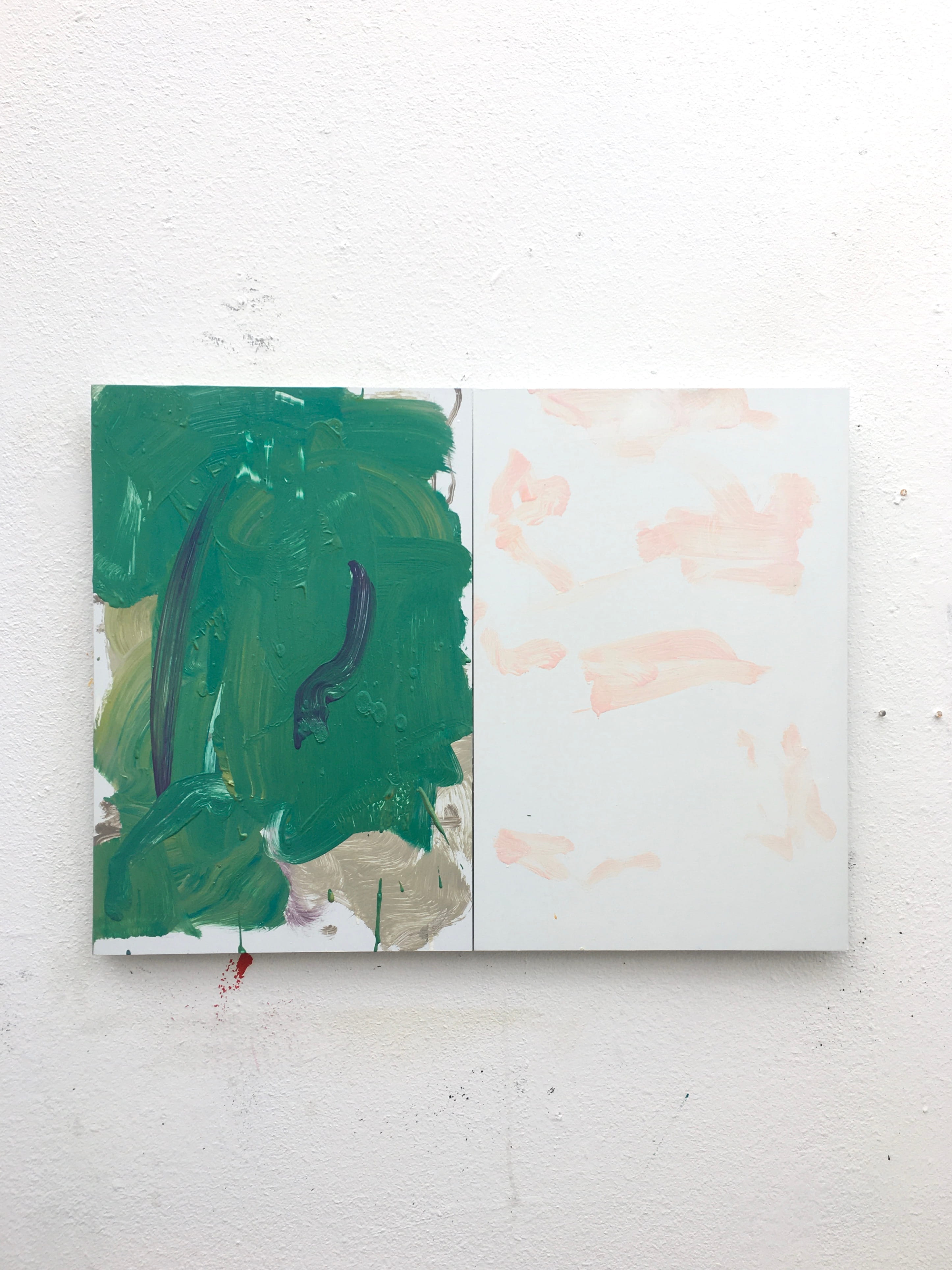 Your works will occasionally feature a word or short sentence. What is your process for deciding on these?

That really comes back to what I was trying to allude to on language earlier. The fragments of language often end up as titles and are a kind of composite for what I’m trying to achieve with the paintings. I’ve done a bunch of quick work on paper recently too that use words in them directly. They might allude to sensuality or just to some stupid little fragment of language that made me laugh.

They normally come from snippets of conversation, pretty often in conversation online or things overheard or read somewhere. I keep lists of them on my phone that just get added to over time. I like fragments of language that open up to something bigger by only just teasing or alluding to other meanings. Something enough to flirt or make you laugh, it might just be an emoji or a meme in the right context. Like one word after a really awkward silence that makes you laugh or one word placed just right with some stupid picture of a cat or a meme in a text or something.


During the government lockdown you've posted some pieces for the artist support pledge. Can you talk a bit about your thoughts on that initiative?

I think it’s a great initiative that Matthew Burrows got going and a lot of people seem to have really taken to it. What’s nice is that it's got a lot of artists are trading between one another and because there’s a pretty modest budget cap people that might otherwise have thought they couldn’t warrant buying artwork are seeing an opportunity to buy something while knowing that they’re supporting an artist to continue making work. Just seems like a good thing all round to me. 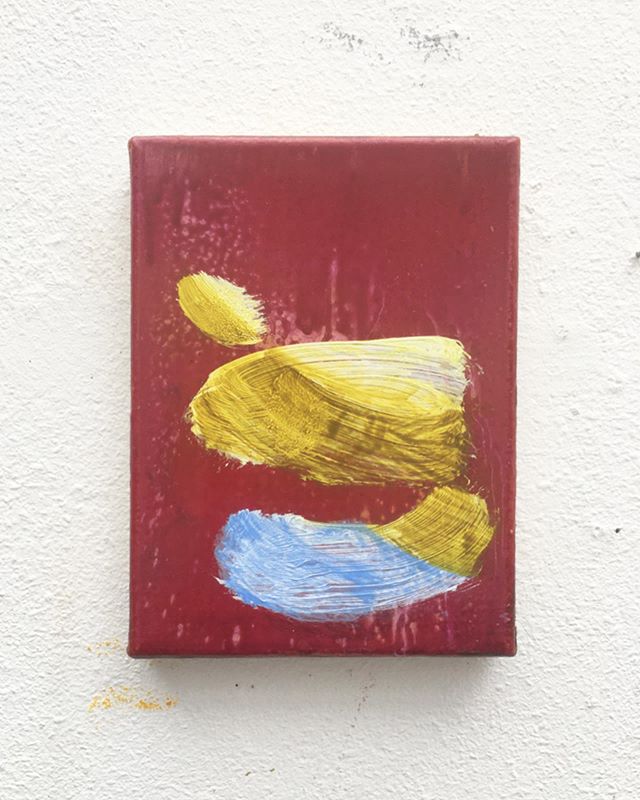