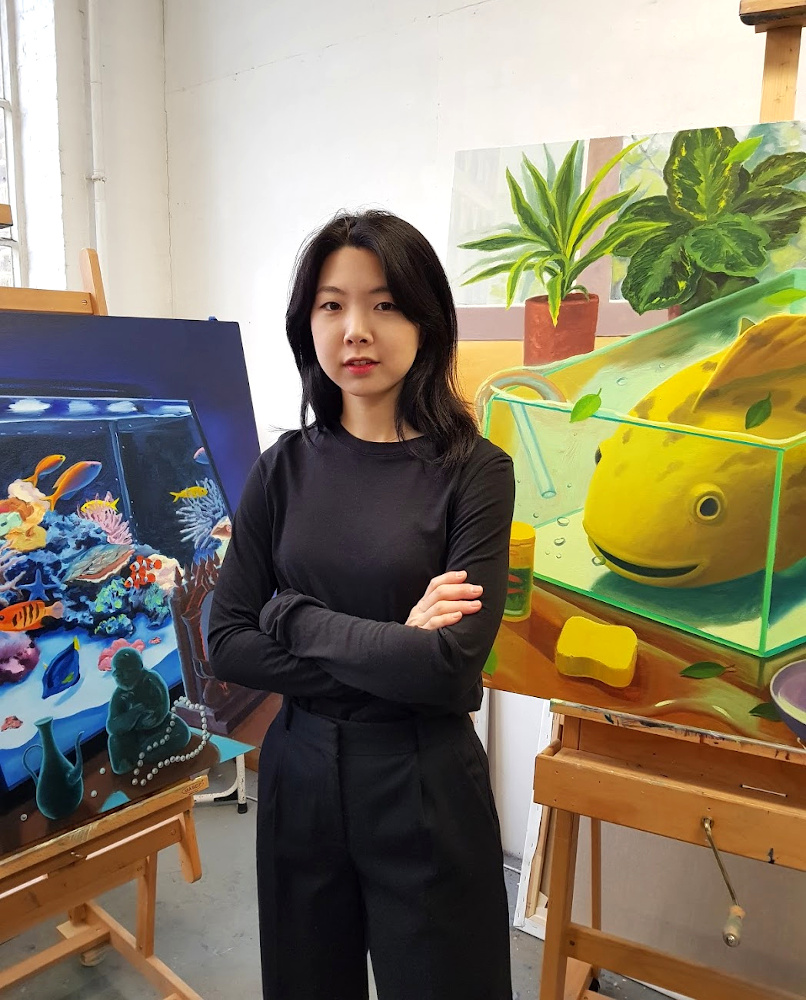 Your practice hovers between the real and the unreal, how do you come to decide the balance between the two in your works?

Although I start working from my memories and things I imagine, I want things to look plausible as if you could touch them or you could be in that space. However, what I focus on more is the mood of a painting which conveys emotion and enables me and the viewer to get immersed in the scene. I tend to paint the elements quite realistically but the vivid colours and the handling and integration of the subject matter within the rest of the painting pushes the image towards having a dreamlike quality. So I guess there is always this tension between real and unreal in my work. 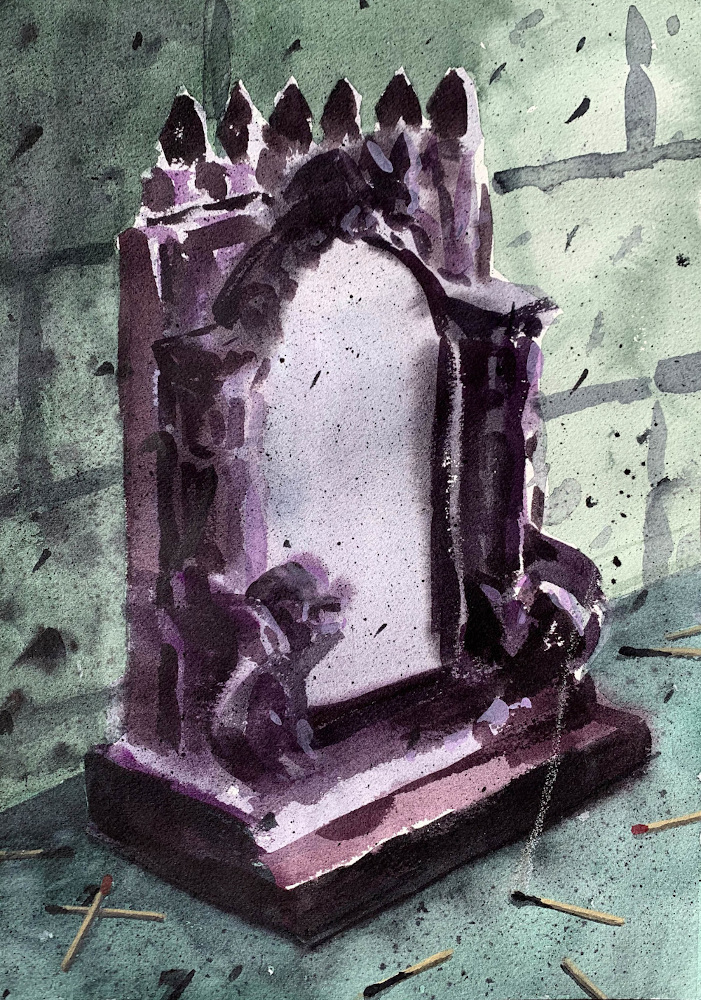 I can see the centralness of feeling and mood coming through in your works. Are there particular emotions that you find yourself focusing on when you paint?

Tranquillity, wonder, a feeling of awe, and contemplation, but playful at the same time. These would be words that would describe the emotions I focus on delivering in the painting. On the other hand, I also focus on evoking more disturbing emotions such as eeriness, uncanniness or mystery. I personally find it more interesting when my painting has both positive and negative elements mixed into it. For example, some works can be serene and a little disturbing at the same time. 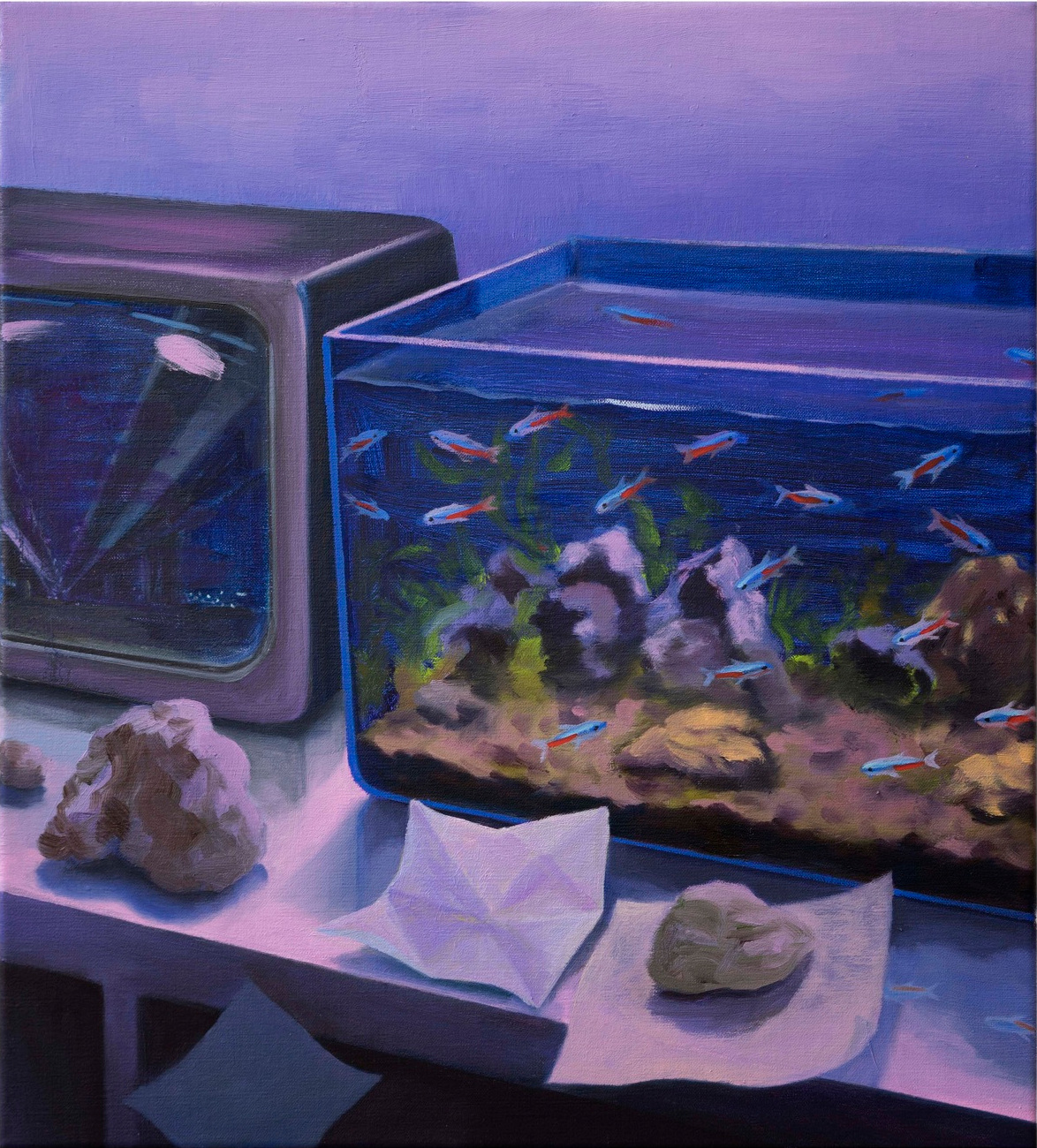 Animals, particularly fish are recurring motifs in your works. What draws you to these creatures?

I have always been fascinated by animals since I was young. I used to watch National Geographic all the time and dream of seeing all kinds of creatures in real life. Naturally, I grew up with having tiny creatures around me as pets (but not necessarily) and the first animals that I sympathised with were fish. I remember goldfish swimming in a big ceramic bowl on my family’s balcony and a large glass fish tank for tropical fish in the living room.

My neighbourhood in my hometown of Daejeon was called ‘Eoeun’ which means ‘Fish is Hiding’. My primary school and the bridge over the river had the same name as well. I would imagine that fish are literally hiding in my town and that the whole place was underwater. I remember someone saying that seashells could be found in the neighbouring mountains as this place used to be an ocean a long time ago. For many trivial reasons, fish were particularly familiar to me and I felt that I am part of them somehow, like I am one of them too as my star sign happens to be Pisces also. When I paint big anthropomorphised fish, I empathise with them a lot, feeling that they represent some side of me.

I am also interested in the fish tank as an object in its own right. It is a glass box that holds nature. I love how the world is arranged inside of a confined glass box. It is a whole world for the fish and a small universe for me. It reminds me of the boundaries of the world I belong to. 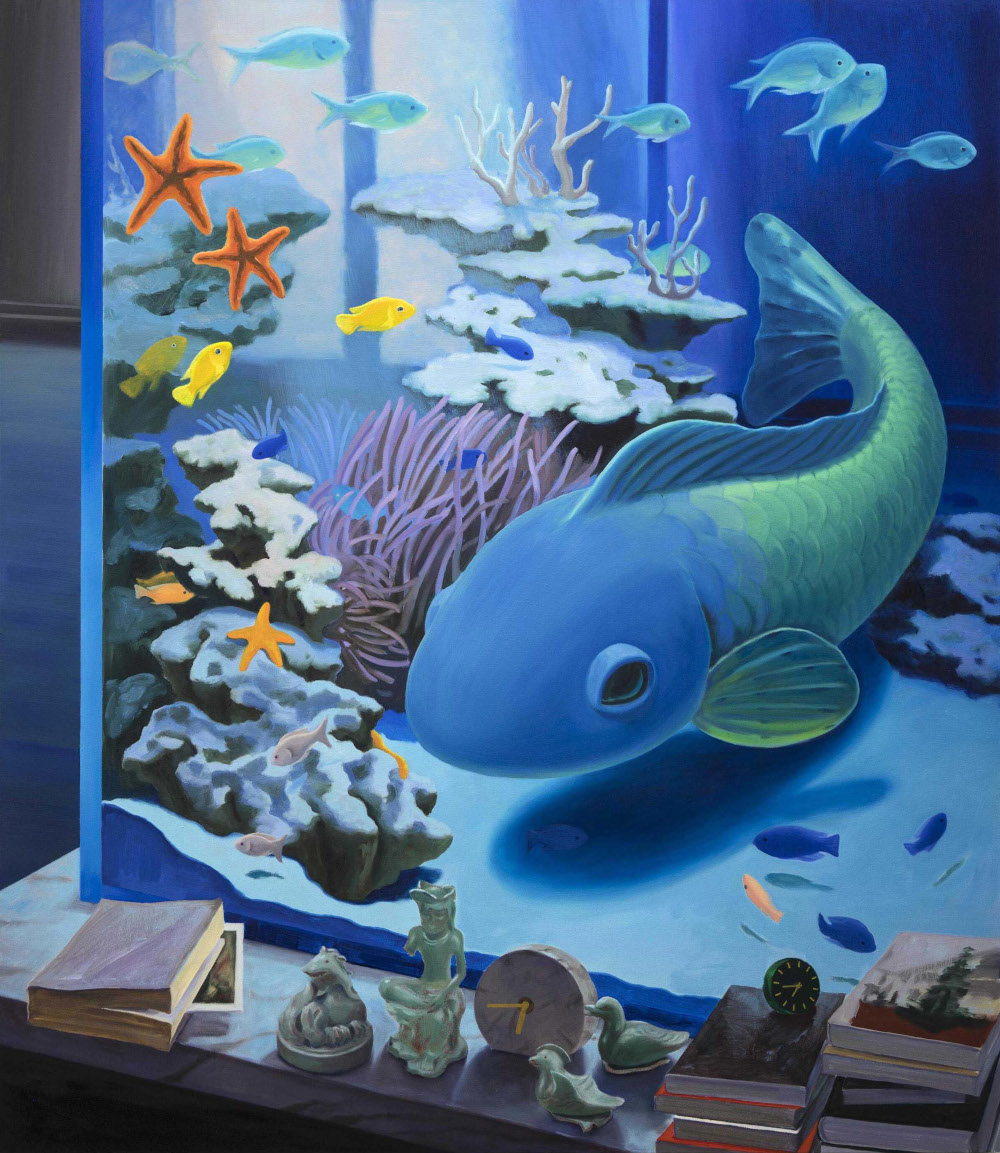 That feeling of confinement is something I'm sure we can all be relating to as of recently. Can you talk a bit about your experiences with lockdown in relation to your practice?

During the first lockdown in London, I had more time to work with watercolours at home. I’ve made a series called ‘Sunset’ which is about a fish tank in an imaginary living room in the sunset light. The confining nature of the fish tank started to stand out more because of the situation. Now I reckon it was my instinct to paint something that relates to my surroundings and I like to think I was looking at a small world from a bigger world. The strong, delimiting lines stood out very clearly in the painting. However, I’ve come to seek something a little more liberating and organic after experiencing several lockdowns. Currently, I am working on a similar theme but I will be focusing more on the inside of the fish tanks or the open water, and on the objects in the water. It will be more about a close up of things I have painted before. It will be more about being part of that world, almost like studying a microcosm. 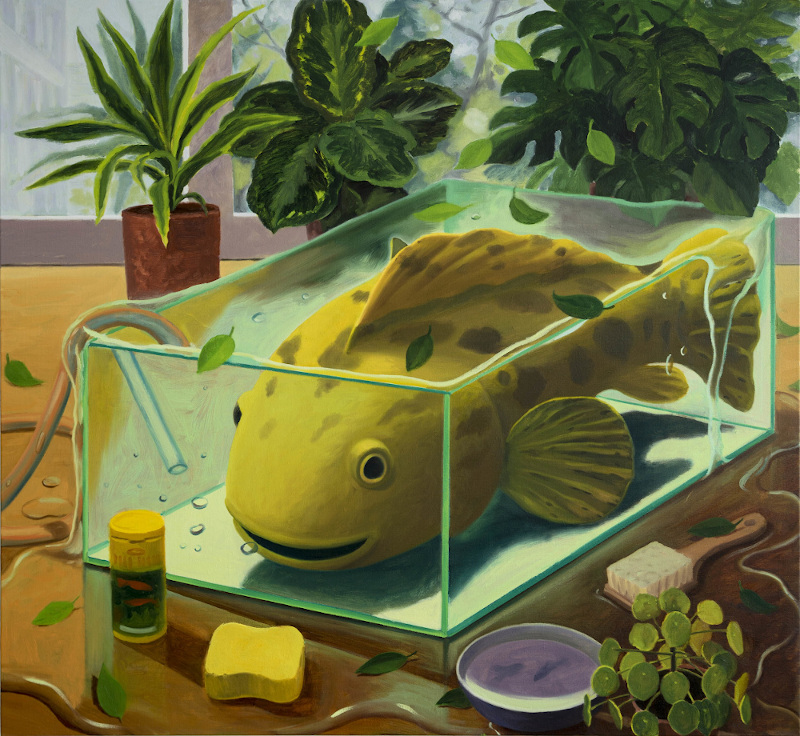 Artefacts that emit light, and light itself, seems like it plays an important role in your practice. Could you talk a bit about the significance there?

Light is incorporated in my paintings to create more depth and layers, which decides the mood of each painting. Also, I am intrigued by how intangible things such as light, are present in paintings as well as in real life.

I love watching the bright moon in the sky. Being in my dim room lit by a monitor screen is very calming as well. Flickering candlelight gives the illusion that still objects are animated. Watching the sunset reminds me of the ever-changing nature and human life which makes small things much more precious and beautiful. 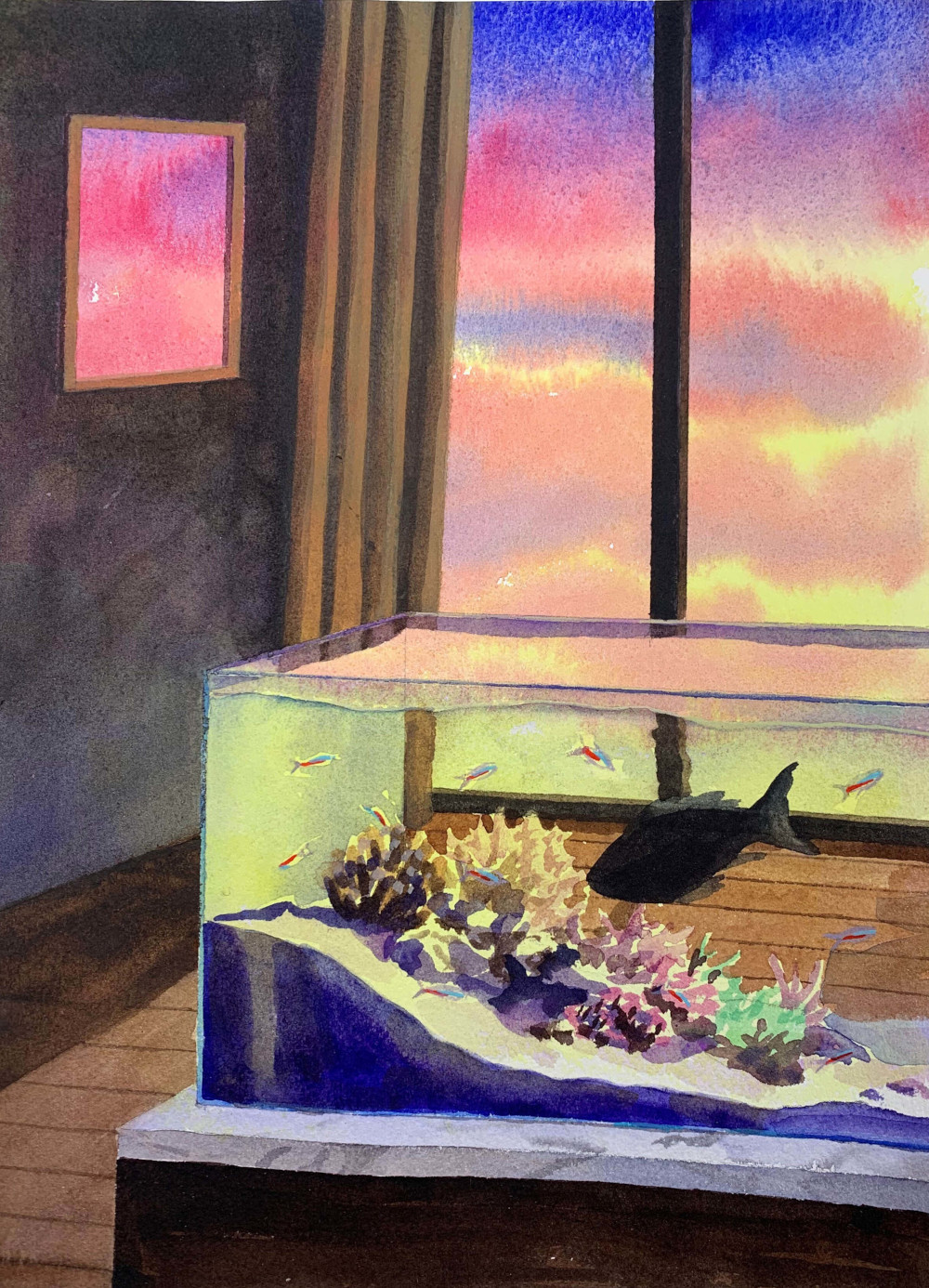 I start working from vague imagery in my mind or from my doodles on paper. Then I choose one element that I definitely want to go along with. It can be anything really, the colour of the sky, one particular object, although I don’t have one particular way of working.

In a recent painting called ‘Still Life with Fish Tank’, I just started with the coral fish tank. In the beginning, I thought I will only paint the fish tank placed on the plinth, but while I was painting, I realised that I need something more. So the plinth became a table and more items were added in front of the fish tank. The objects were chosen to balance out the composition and elements I was interested in then were added to the painting. A toy mirror that appeared in a video game called Animal Crossing or a traditional Asian ceramic bottle and a water dropper and so on.

Overall, I adapt a lot to what is already painted on the canvas and work quite intuitively changing colours, shapes and composition. 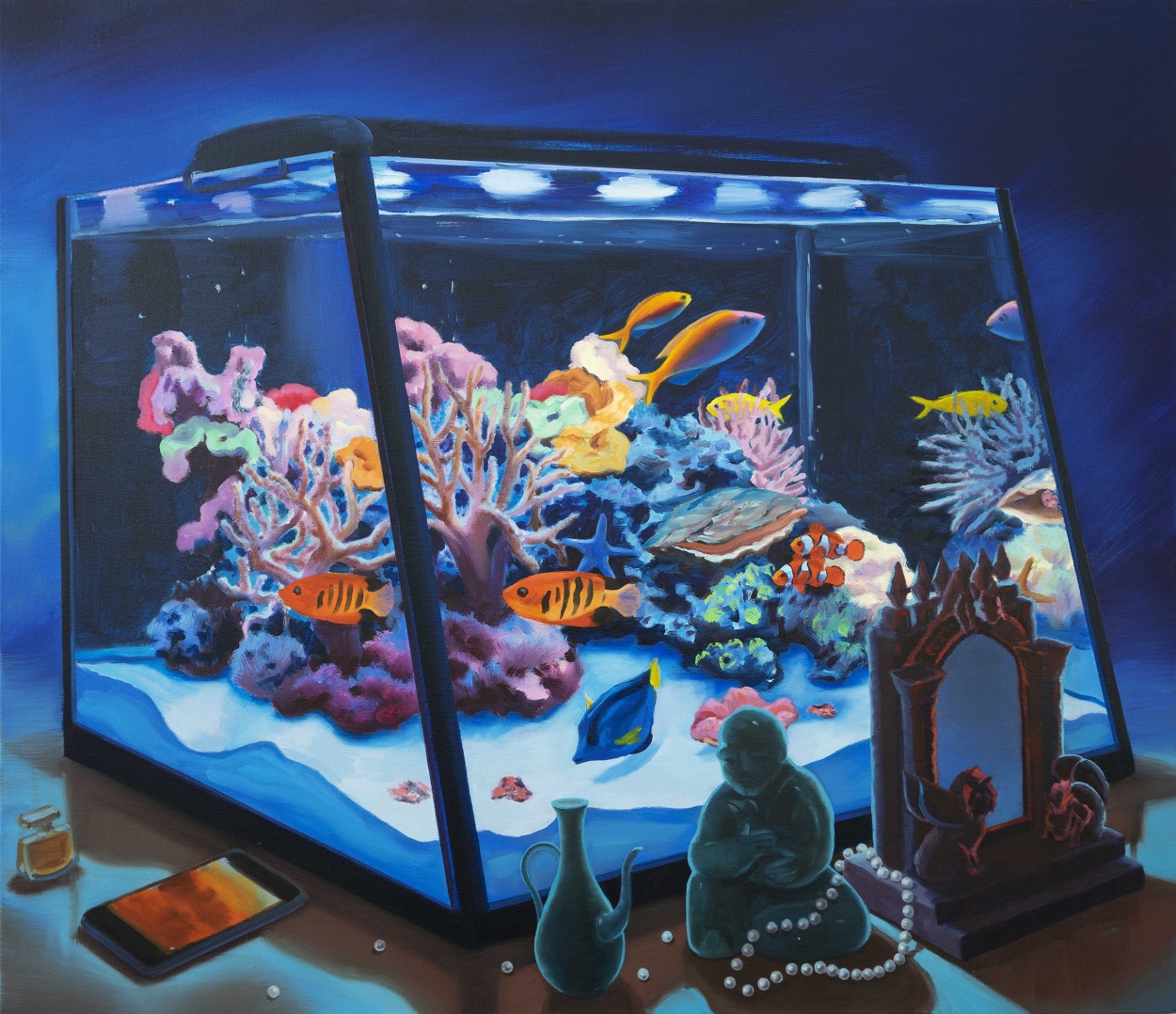 It would be great to hear a bit about your future plans. Can you fill us in on what's to come?

‘In Conversation: Part II’ will be a duo exhibition in mid-April with Mircea Teleagă, curated by Bo.Lee Gallery at Copeland Gallery in Peckham London. We have been sharing studios for several years and ideas about paintings too. We’ve been thinking of showing our works together for a long time and it is very exciting that it is actually happening. I am also working toward my solo exhibition in June at Lychee One Gallery in East London. I am aiming to expand the idea of the fish tank and still life for the exhibition.