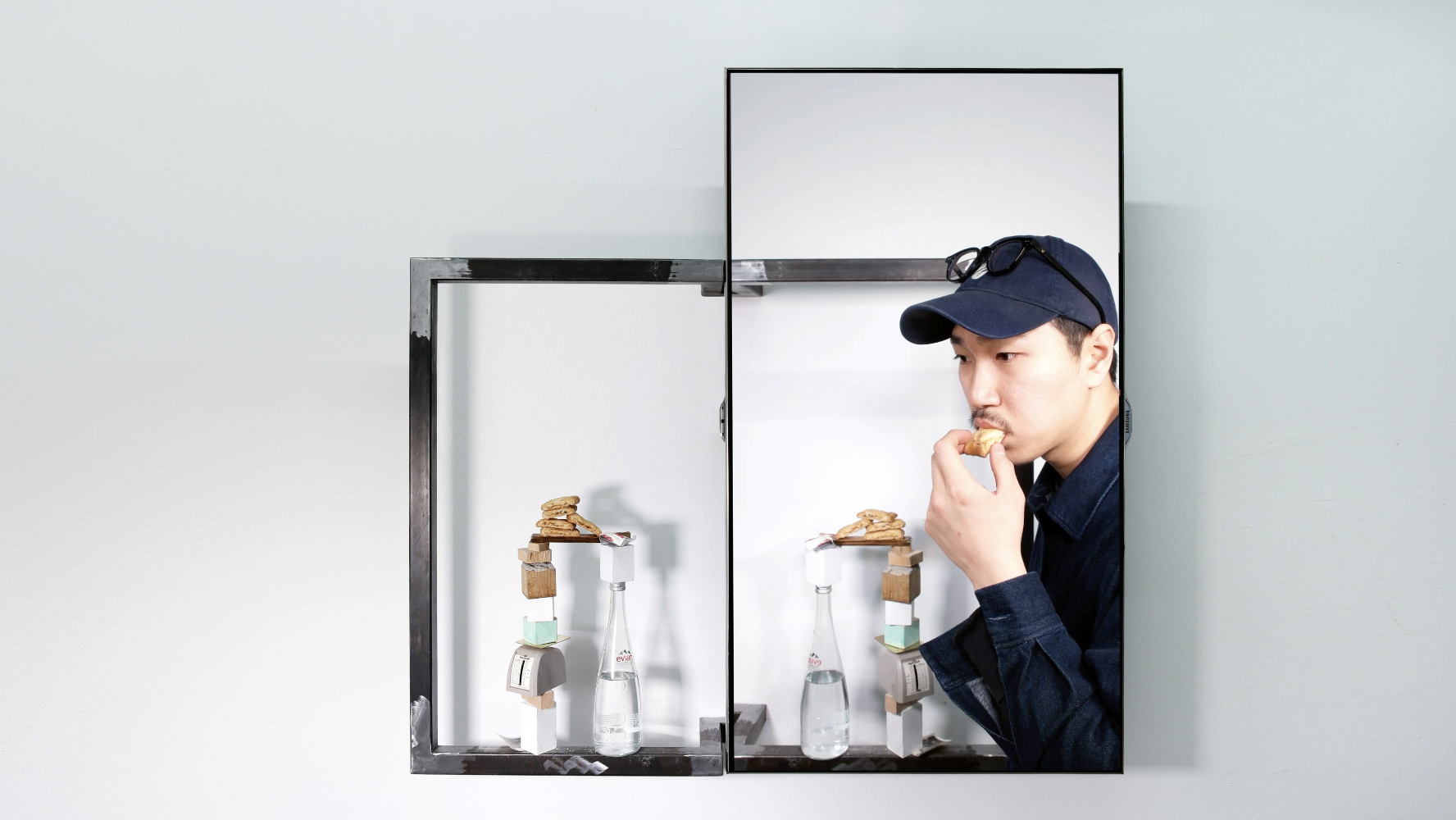 Identity and conformity feel like important drivers in your work. Can you talk a bit about how your upbringing shaped your work today?

The fundamental question of who I am is one of the important parts of my work. That's why I spend a lot of time figuring out exactly my growth background. My work usually starts with a personal story, but after a multi-step process, it becomes a social subject that can be presented. Through my conversations with my contemporaries, I find common ground with my own that can be found in their growth background. And from a macroscopic point of view, the causal relationship is analysed by taking into account the historical background of the similarities.

As a result, I find certain social phenomena and identify and explore the structure of the dominant ideology behind the social phenomenon. Based on the ideology by the French philosopher Louis Althusser which was classified into eight categories (Religion, Education, Family, Law, Politics, Union, Communication, Culture), I subdivide my growth background and visualise it as a work. 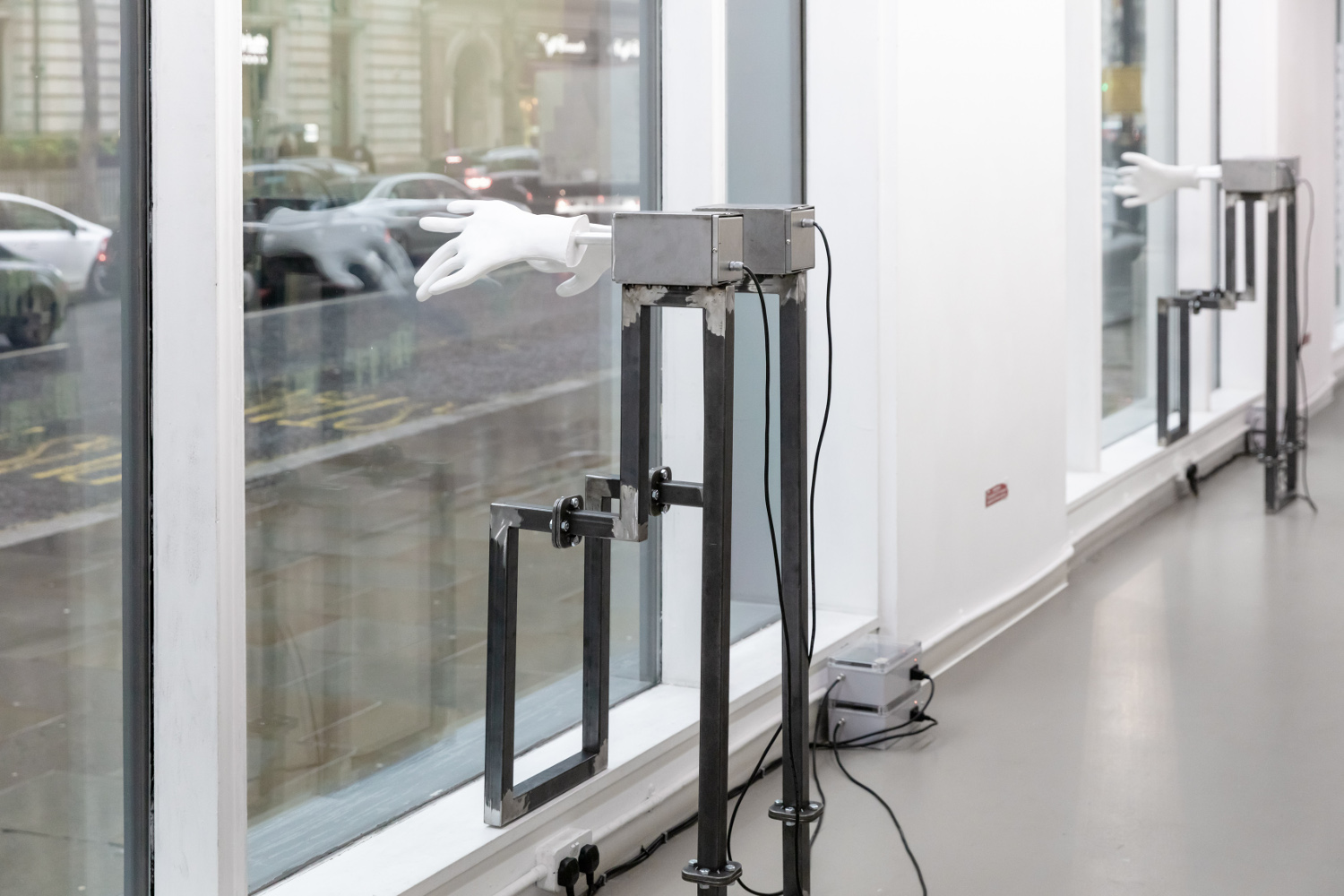 Your work can often be seen to be exploring the darker landscape of the animated world, where misfortunes are accepted comedic devices. What is it that draws you in about this theme?

People try to turn away from terrible reality. And they tend to escape into fantasy rather than honestly facing their trauma. There will be several mediums that can replace such fantasy. In my case, animation was one medium that helped me escape from reality, and for me, it became another reality. And it played a role in forgetting unconscious trauma. I may have co-existed in those two worlds together.

There is an element called slapstick which is used as a universal device that gives laughter to the audience in animation. This device in animation has one irony: if the ridiculous scene expressed in the animation is reproduced in actual reality, it very often turns it into a tragedy. I was greatly fascinated by the special device of animation, where tragedy can also be a comedy, and began to explore and visualise the vague boundary between tragedy and comedy.

The tragic body transformations expressed in my work are the quotations of expression techniques derived from animation. I metaphorically express my negative attitude toward escaping into a virtual world, avoiding terrible reality by intentionally making a tragic reality.

I would be intrigued to know if there are things you've found yourself noticing or taking influence from over the lockdown period? Have you been finding more time to watch animated movies whilst being indoors?

I minimised going out and bought all the necessities online. And I spent most of my time playing a game called Animal Crossing, and during this time my daily life has been replaced by that game. Perhaps the cumulative playtime is 650 hours! I do most of my social activities through the game, and meet my friends for a picnic or a walk together. I’ve enjoyed the time online as much as meeting friends in person. As time has gone by, meeting friends there has become very familiar and comfortable to me. I think I've spent all my daily life on the Internet since the lockdown started. This situation is a bit extreme, but there is one thing that I have clearly realised; that the future where the real economy and real experience would disappear is coming.

The rapid financialisation of the global economy has led to the virtualisation of real currency, and the physical action of exchanging real currency in commodity trading is disappearing. I think that fact is a huge event in world history. I think the disappearance of the physical act, which has been maintained for centuries, is a tremendous event in the history of the world that foreshadows the upheaval to come.

The capitalist economic system has faced a major crisis and many scholars anticipate the fall of capitalism and the advent of post-capitalism. This pandemic has become a catalyst for such upheaval, and in reality, we could see the collapse of the real economy. If I anticipate this situation in stages, the physical purchase between people themselves will one day disappear, and so many real experiences will be lost. 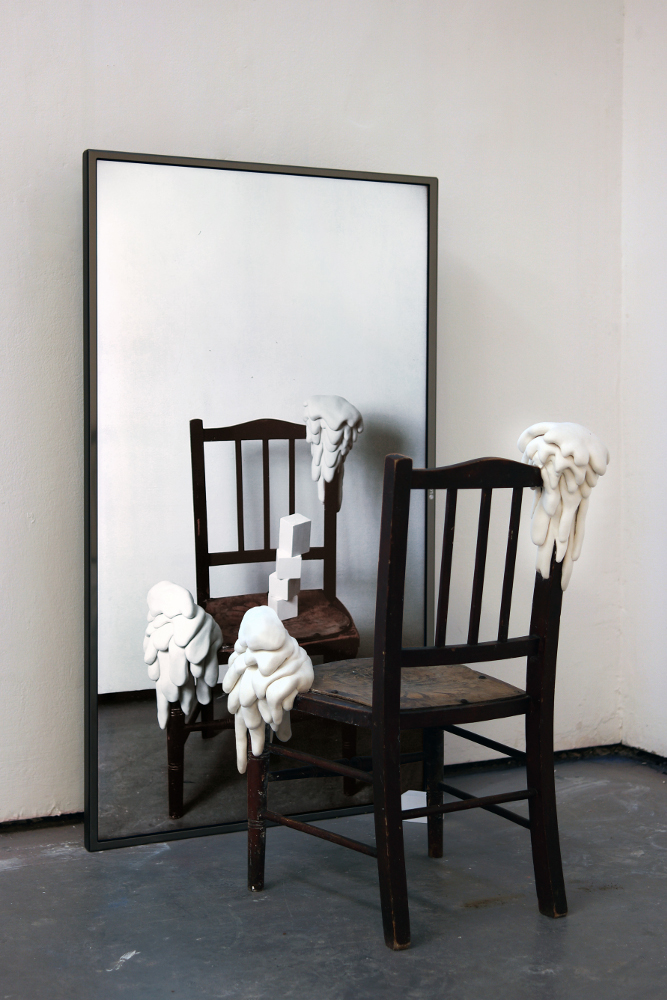 I've been told that your dreams have a strong influence on your work. Is that true?

During the process of developing my context, I think it is a topic that I once had to deal with. It was necessary to analyse my unconsciousness to explore myself.

The images that I have experienced and acquired in my daily life are stored and superimposed in my head. Even the images I consciously miss are saved. And the superimposed memories are scrambled and recombined like laundry in a washing machine. And according to my psychological state, the images are expressed as dreams. Dreams show my visual unconsciousness. Based on the content of the dream and its visual unconsciousness, I was able to know a little bit of how I have existed by interacting with other objects in this society. I may have tried to read reality through dreams, just as people in prehistoric times tried to read the signs of reality from dreams without distinguishing between dreams and reality.

Based on this analysis of dreams, my context has been able to develop in many directions. In particular, I could start exploring the blurred boundary between reality and fiction as virtual reality and augmented reality become more sophisticated. But I no longer directly reflect the context of dreams in my work. However, the subject is always involved at the base of my work. 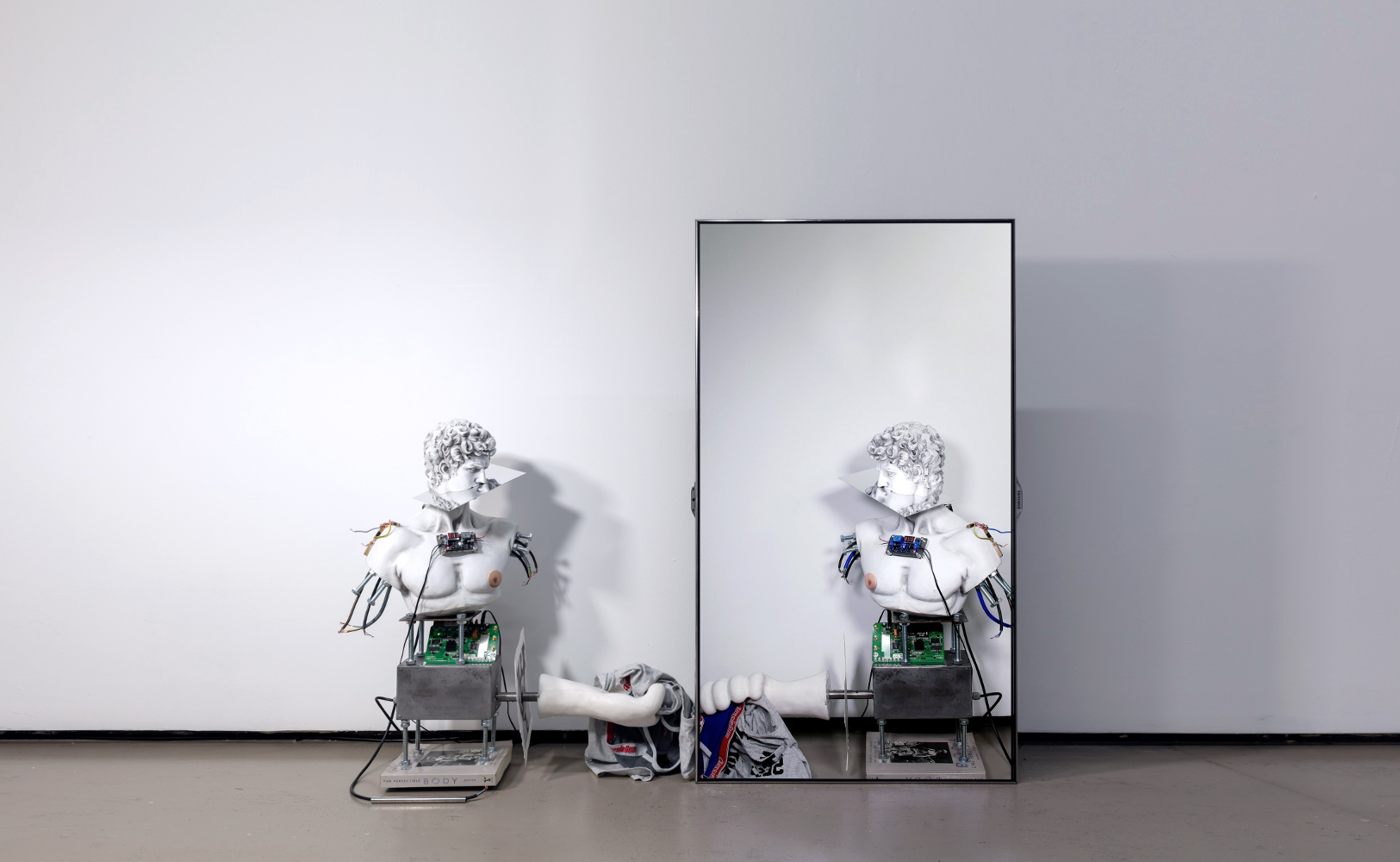 Several of the works you produce have kinetic elements to them. Could you go into a bit of detail about the process of building out those elements, and also about the importance of the motions they produce in your work?

When an idea comes to mind, I write it down or leave it as a simple sketch. Most of the ideas are impossible to embody. However, I keep thinking about whether it can be implemented realistically. In fact, even if you implement simple movements, there are a number of problems and technical limitations that come with it, so I try to keep it simple. Once the ideas are sorted out, computer software is used to model the appearance as realistically as possible. In addition, I think about the pattern of movement and design a PCB board that enables the motor to run. At this stage, I design and manufacture with experts because I lack advanced knowledge about it. When it is finished, it continues to fix the problem after several tests.

All of the movements shown in my kinetic work are quotes from animated movies I watched. So, I didn't want to embody a scene with motion as a ‘still piece’. I think I was naturally interested in the kinetic genre to convey my ideas as effectively as possible. 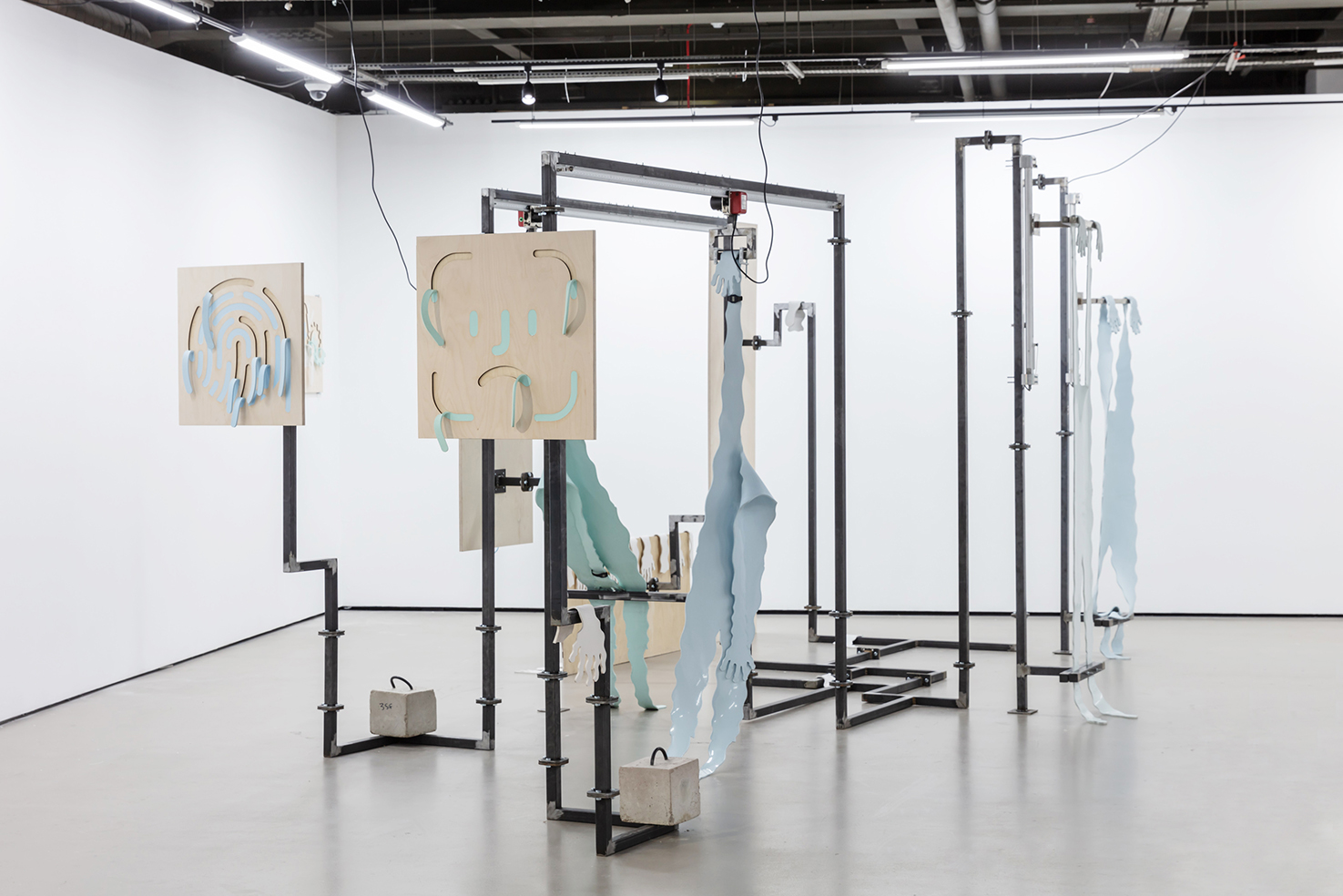 Your practice has some really strong thematic elements. Are there any ideas or themes that you are less direct about or people tend to miss when viewing your work?

Recently, I showed installation works that abstractly shaped the production line of a factory. In the background is my intention to reflect the social image of this era.

We may know that our ego is formed by the dominant ideology from the moment we are born and that we live our whole life as part of this society with the imposed ideology. I thought that this is rather like a factory-made industrial product. Also, I thought that the production line of a factory implicitly shows our social image. In fact, the factory, which is also an icon representing the present capitalism and neoliberalism, immediately shows the stream of times. In my recent work, I explore the nature of modern society and the human dignity existing under it. And I describe the factory metaphorically, explaining how we have been overthrown and dominated by the social system since the Industrial Revolution.

During the Industrial Revolution, a machine-centred mindset dominated human civilisation. We had to adapt our body and mind to this cold and huge machine. However, in the current era, since the Information Revolution began, it has become the opposite situation. Machines are now tailored to humans, but we are increasingly chained to them. We are turning into easily controlled and infinitely weaker beings, drunk with the convenience of modern civilisation. I probably express in my work a weak human being who can not stand up to the dominant power. Maybe it describes myself. 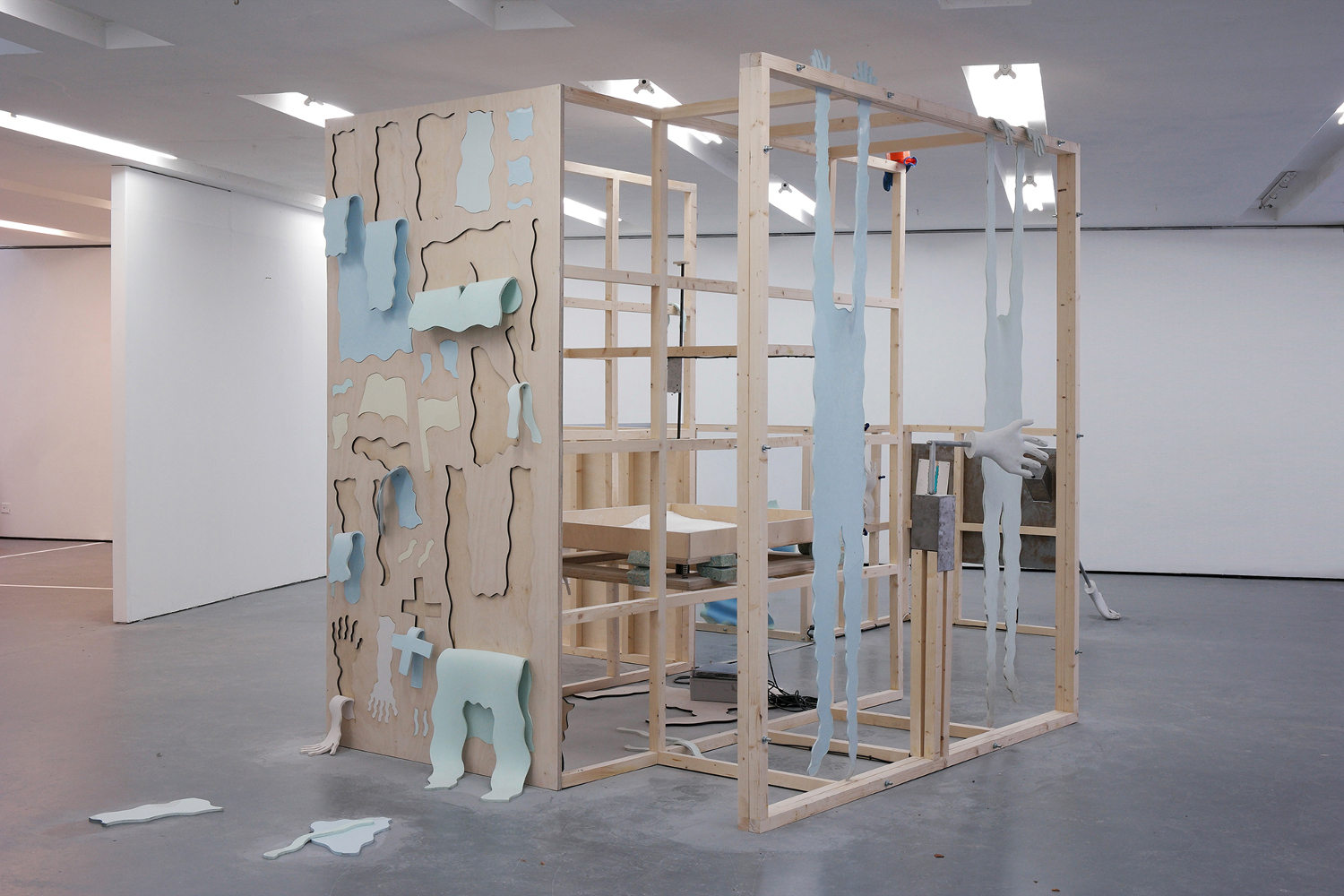 I feel like you provide such a vivid depiction of the themes and references which guide your works. One area that would be great to round out on is how other artists practices have been influential over your time as an artist. Can you shed some light on that?

I tend to motivate myself by looking at other artists' works, Doho Suh, Elmgreen & Dragset, Erwin Wurm and Namjun Paik spring to mind as influential. I learn a lot of things from artists who deal with mediums that I can not handle, or artists who work with a larger scale, for example. They not only remind me of the things I need to develop as an artist, but also inspire me to realise how much my work can develop. Maybe I could not develop my work unless I was influenced by other artists.